If you’re looking for some easy ukulele songs for beginners, you’re in the right place. We have found easy ukulele songs in nearly every genre of music, including pop, Classic Rock, country, reggae, ballads, and more. Plus, they have only four chords!

In addition to easy ukelele songs with four chords, we’ve also included some that only use two chords! So, what are you waiting for? Practice a new song every week and you’ll be confident enough to play at parties in no time.

This song from U2’s Joshua Tree album is not only the UK band’s one of the most popular songs. It is also one of the easiest ukulele songs for beginners. The chord changes and strumming pattern continues through the song, so just start with down strokes.

What makes this song perfect for beginners? It flows with one chord per line. And, the D chord appears on the bridge! The second downstroke is what you emphasize to get that familiar rhythm. Learn this chord pattern and you’re learning at least fourteen other songs, too.

A great pop song by Train. You can apply what you learned from I’m Yours right here.

This is a fun ukulele song. Once you’re comfortable with the chord progression, try using different strumming patterns. There are a couple of options for chords with more color on the bridge, but leaving those out won’t hurt the overall feel of the song.

5. Just the Way You Are by Bruno Mars

The hardest part of this song is singing over the verses. Other than that, it’s one of the easiest ukulele songs to learn.

Don’t overlook two chord songs! They’re a great way to learn strumming patterns, get used to chord changes, and for learning how to sing and play your ukulele at the same time.

7. One Love by Bob Marley

One Love was first released on Marley’s album, Exodus. And, it’s a great introduction to playing Reggae ukulele tunes. Plus, you can try various strumming patterns with the verse.

This soul classic has held enduring popularity since it was released six decades ago. It makes every list of simple ukulele songs. The progression is C, Am, F, G7, C and remains the same through the verse and chorus.

Adele’s songs are never complicated. The verse is G, D, Em, and C played three times through right on the downbeat. The progression changes on the bridge and the interlude, but if you get the verses, you’re almost done.

The Beatles are on everyone’s lists of easy ukulele songs.

Practicing the diatonic chords in the key of C gets you 99% of the way home. It’s the same chord progression as I’m Yours. The only snags are the A and A# chords on the bridge.

A beautiful four-chord ballad that you’ll master in an evening.

12. Love Yourself by Justin Bieber

You’ll need a capo on the 4th fret to play this in the key of C. The G/B in the verses creates a smooth bass line.

This is another two-chord gem that’s great for practicing your chucking. Start with downstrokes while you get comfortable singing along and then add the strumming.

This classic has been covered by a lot of artists. Once you learn it while strumming, it’s a great song to study finger-picking. Be sure to play it for fans of the Shrek movies.

This early release is easy to learn. When you change between the D minor and G7 chords, your index finger remains in the same place. This is known as a “pivot finger.”

One of the most popular two-chord songs ever to hit the airwaves also falls into the category of simple ukulele songs. The percussive, muted strum pattern is familiar to fans of Rhythm and Blues.

You’ll easily pick up the chord changes and lyrics. Amin to F to C is 95% of the song. Add Gmin in front of that sequence and you’ve mastered the entire song.

If you learned Just the Way You Are, you just have to learn the strumming pattern.

19. Hey Ho by the Lumineers

This was a top 10 hit around the world in 2012. It was written with the title intended to be shouted in order to get attention. If you’re working through this list, you already know the basics. It’s in the category of learning four ukulele chords songs for beginners.

Learning this song in G will add the Cadd9 chord to your library. Add picking styles to make it sound closer to the recording. Play this song for fans of Southern rock or if you just want to imitate that guy on TikTok.

Bonus! If you’ve made through this list of easy ukulele songs, try Auburn’s Perfect Two ukulele chords that are G, D, Em, C. You can pluck the strings and not worry about strumming at all.

Best of luck in your music-making journey! 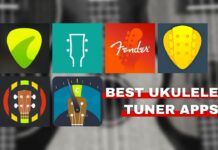 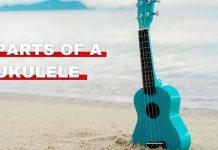 What Are the Parts of a Ukulele? 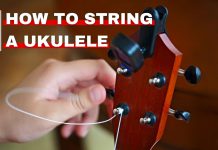 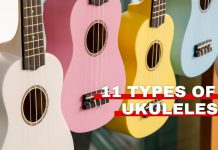 11 Different Types of Ukulele – Which One Is for You? 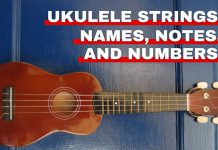 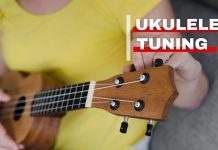